Well, firstly we have to start with the weather (we are British after-all). What a weekend of sunshine, so shout out Victorious for putting it top of their to-do list. It really was perfect to stand on the Common, listening to good music with the welcome addition of fresh sea air and views. 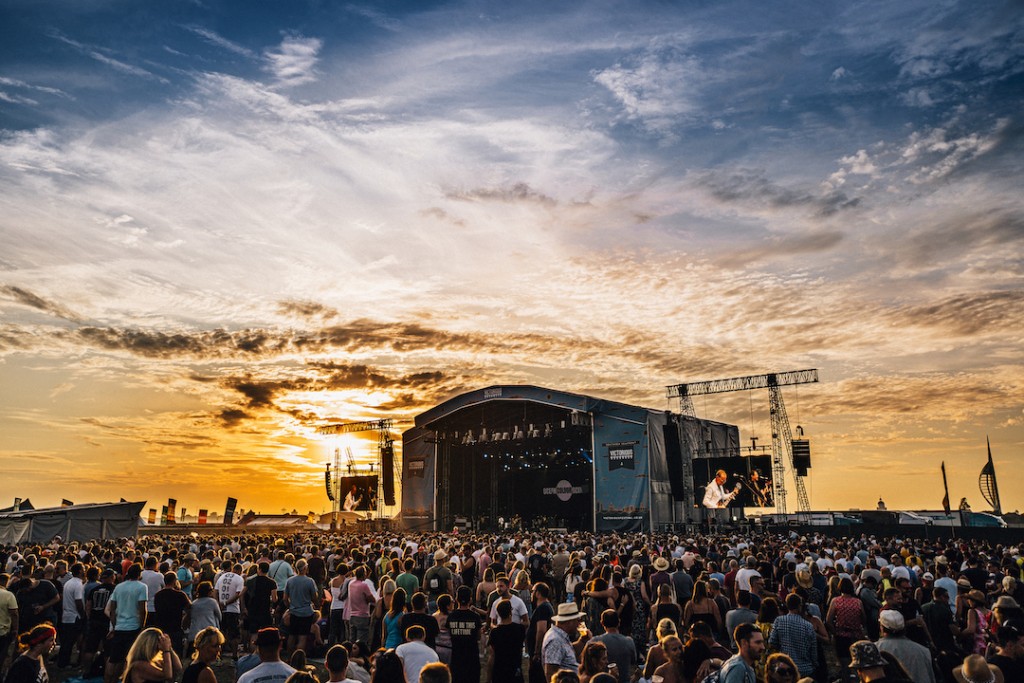 Festival proceedings kicked off at 2pm on Friday. We headed down not long after to soak up that vitamin D,  check out the World Music Stage, munch some South Indian goodness, take in the views from the Strongbow viewing platform (with a cider of course) and settle in for The Zutons of You Will You Won’t and Valerie. After the set we took the time to check out what the Premium Enclosure had to offer, yes we are those type of people now! Shaded seating, hammocks, games, bar, food, luxury toilets and the main stage viewing platform from where we watched Doves perform.

As the sun was setting (and what a sunset it was) The Specials took to the stage to the delight of a large percentage of the crowd there to see them. Their performance was professional and they pulled out all of the classics. It was a battle of the headliners with Dub Pistols packing out the Beats & Swing Tent for a high energy 90 minute set whilst Two Door Cinema Club took to the main stage for a very well refined performance. As it happens they’ve got loads of hits but considering we’ve seen a lot this summer we kind of wanted more from them as headliners. Also half way through their set the Strongbow area was absolutely bouncing so we went there.

Local band Scarlet Town opened up festival proceedings on the Saturday morning to a busy Acoustic Stage and blaring sunshine, the sign of good things to come which was certainly the case with All Saints performing a special afternoon set on the Common Stage before local gal, Jerry Williams brought all the vibes to the Castle Stage with her band.

The Castle stage area started to fill up during the afternoon and the excitement built as  the audience got in the mood for Professor Green and then Lewis Capaldi. At one point the queues for the Bar were so long, they stretched across the Common halfway to the stage, a sign of the huge numbers gathering rather than the ineptitude of the bar staff, who worked really hard and managed to keep the crowds moving. Professor Green did not disappoint – love his live set, and by the time 7pm came we’ve never seen so many people on the Castle Field at one time. Lewis Capaldi aced it and the crowds loved his music and humour. Another glorious sunset accompanied a good set from James Bay and then the crowds went mad for Rudimental. Fireworks ended the day – possible one of the best days of any Victorious Festival.

Sunday we asked one of our dads to take over The FSTIVAL Club story, if you haven’t seen it yet you should definitely check it out, best content of the season probably.

The sun carried on shining on Sunday and the holiday atmosphere carried on. The crowds loved Razorlight and the Vaccines. Our highlight was Tom Grennan, still smashing it from when we caught up with him last summer – what a gent! And a tight professional band too. Clean Bandit and New Order were the headliners of the day, with the crowds equally split between the two and equally happy with the performances.

The Journey to Victorious Festival

Living in Portsmouth the festival is super easy to get to as it’s on the common. Even if you travel in on the train then the walk isn’t too far from the station or a taxi will cost you less than a fiver – pretty convenient really!

Getting in to the Victorious Festival

The fact you could come and go up until the last entry at 8pm there was never much of a queue to get in plus there were 5 different entrances depending which side of the common you were coming from so you never had to wait too long before you were in the festival site. Security were on point with bag searches for obvious reasons. If you camped there were free shuttle buses taking you backwards and forwards to the entrances throughout the day.

How Much Were the Drinks at Victorious Festival

Drinks were proper festival prices and something the locals expected but aren’t used to, you know you can still get a pint for less than £4 up the road. Two large bars by the Common Stage and large bars by all the other main stages. One thing you have to do is go and have a glass of Champagne in Southsea Castle, it’s not often you get to do this so the £15 price tag is well worth the experience. If that felt a bit steep, then the chilled Prosecco at £8 was a good substitute. They were super hot on Challenge 25, we’re definitely NOT 25 or under but got asked a few times.

We’ve mentioned the alcoholic drinks but one thing we haven’t mentioned and Portsmouth/Southsea is very good at is coffee, lots of great coffee spots were on offer a perfect acompanment to live music in the morning (or night time if you were driving).

Loads of really great food options this year and a definite improvement on last year with even more on offer, especially in the Street Food Way area where you could get everything from barbecued jerk chicken to a tray of South Indian food. Local Indies were also on-site providing fresh food and coffee across the 3 days.

The Greek Souvlaki wraps were a pretty popular choice although would set up back £9-11 per wrap. We went for the Fish & Chips by the Common Stage which was also majorly popular, £10 for a large portion but it was fresh as fish and well worth every penny as the sun set.

You could munch literally anything; Pizza, Chinese, Burritos, all of the Dessert, basically whatever took your fancy. Vegetarian options were also a plenty and there was even a dedicated Gluten free truck providing bowls at £9 which looked REALLY good. Mac n cheese – a festival essential – was on offer from a couple of places but a local independent trader’s offer was definitely the best!

The Facilities at Victorious Festival

If you timed it wrong and visited the toilets after a set on one of the main stages then you were going to have to queue, if you were sensible or seasoned festival-goer and timed it right you were fine. We found out on day 2 that there were urinals for the mandem but they could have been better sign posted instead of adding to the queues for the actual toilets.

There were two welfare tents on-site for any illnesses and injuries. There were also roaming welfare teams offering out sun cream to anyone looking a bit pink.

Plenty of security dotted around the festival site and to be honest we didn’t see or hear of any trouble so well done Pompey.

The Main Common Stage was where you could catch the main acts and a special set from All Saints on Saturday afternoon. It never got too busy like it has done in previous years but we think that is down to good planning all round, although Rudimental probably pulled the biggest crowd where the viewing platform in the VIP area was very welcomed. 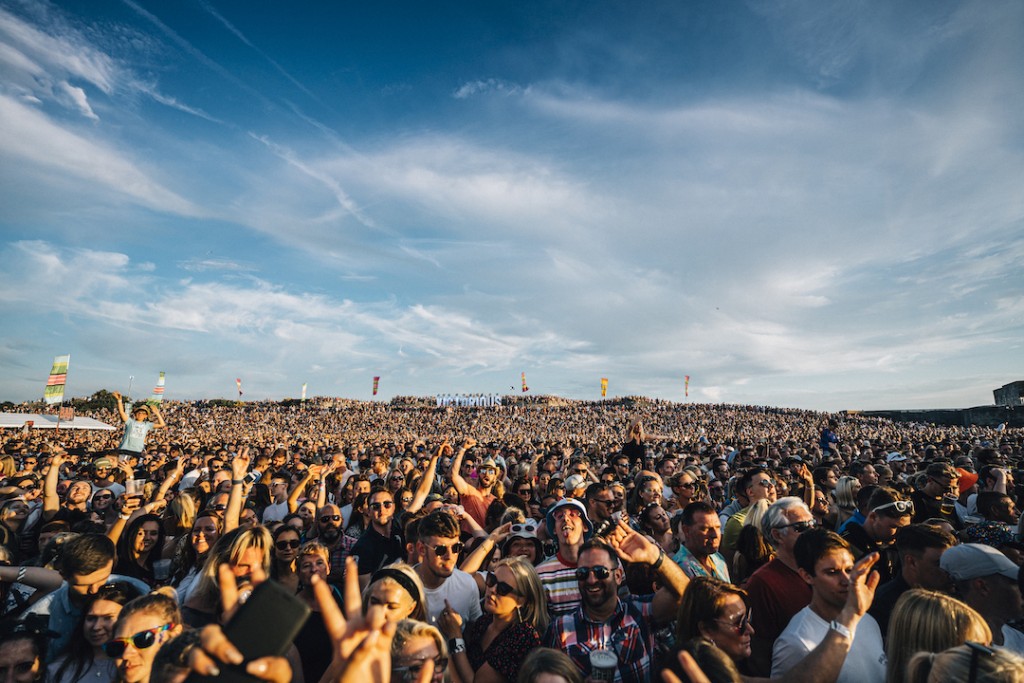 This year there were also “big” names on  the Castle Stage plus you could get a great VIP view from the hill and rest weary legs at the same time. Highlights for us included Jerry Williams, Professor Green, Tom Grennan and the Scottish Beyonce, Lewis Capaldi who absolutely packed out Castle Field. 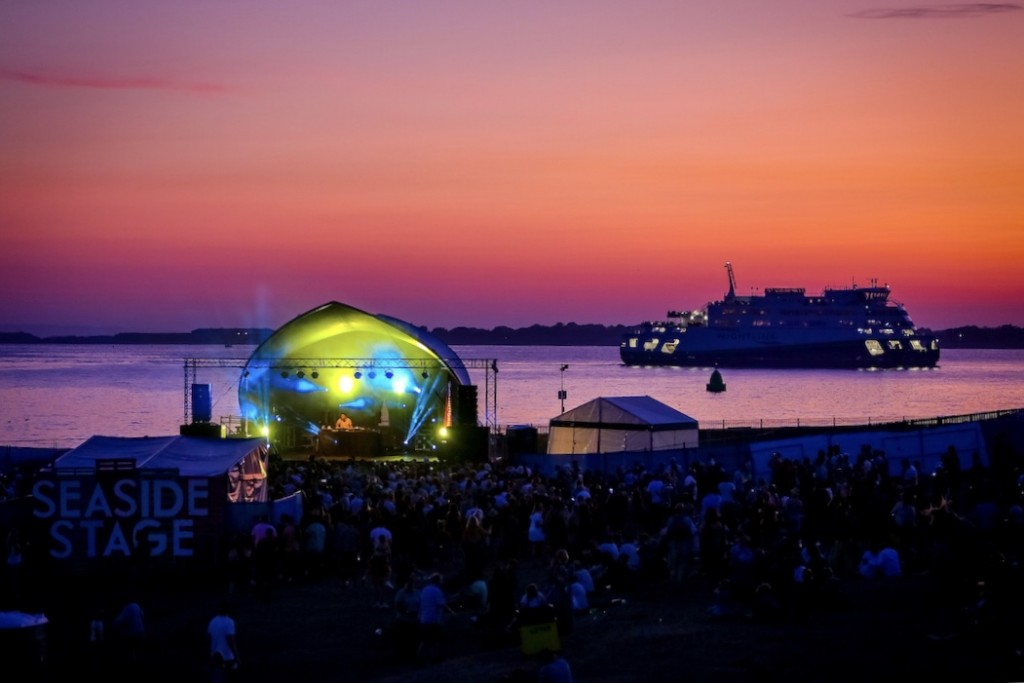 The Seaside Stage was another big hit amongst the younger festival-goers looking to discover new acts such as Colour of the Jungle and Flowvers, both local and both ones to watch. Funnily enough it’s called the seaside stage because it is literally next to the sea – what a view, huh!?

Other stages included the Acoustic Stage playing host to some very talent musicians across the weekend, the World Music Stage invited people from, well, all over the world to perform, local schools, theatres and enterprises hosted individual stages to give young and old aspiring musicians a chance to perform on the festival scene.

The sound at Victorious deserves a mention, it was brilliant across every stage, something a few other festivals can take note of. Victorious courtesy of Performance Interpreting also provided British Sign Language Interpreters for the festival meaning those hard of hearing could enjoy every moment of the festival as well.

What Else Was at Victorious Festival

Strongbow was back with its own area with a dedicated bar selling.. you guessed it,Strongbow. It offered a place to chill out on seating, there were fuse ball tables plus it had a viewing platform. It had its own line-up across the weekend and was definitely the place to be after the sun had set.

There were loads of Market stalls, and local independents were selling everything from vintage clothing, to hats, to glitter to skateboards by sponsor

There was a mini market in the World area and a dreamy Wishing Tree, with personal messages alongside environmental wishes.

Duracell were there to keep you charged up over the weekend offering the loan or purchase of power banks and Rowntrees were randomly there handing out free Randoms to keep your blood sugar levels high with all of the shape throwing.

It was the festival that kept on giving. In the Ha Ha area comedians took to the stage all weekend. There was a Literacy Areas and a Spoken Word Stage. We were really impressed with the Kids Arena this year – no wonder Victorious is nominated for awards in Best Family Festival categories. There were traditional fairground rides alongside face painting, pottery making for kids, Pompey FC skills exhibit. Kids could get involved in a Mudder challenge and learn circus skills – you needed three days to get round!

We spent a bit of Sunday exploring the site and especially enjoyed discovering the Southsea Skiffle Orchestra. We reckon Victorious must be the only festival to offer 30 skifflers singing traditional skiffle songs and playing ukeleles and washboards under a tree named the Piano Tree. Just a lovely quirky moment!

What a great weekend – well done Victorious – your best yet. We’re told Super Early Bird tickets for next year are available form a mere £25?