Mid July often means Lovebox for us and this time round it was no different. The sun was back shining over London Town and it was almost time for us to make the long journey allll the way to West London.

Being it’s second year, it looks like the festival organisers took note of our feedback from last year and ironed out a few first year teething issues with the main one being getting people into the festival as this time round it was pretty seamless. Security were thorough but quick and everyone was inside the festival in no time. As you entered you were greeted by the Lovebox sign which you’ve now probably seen on Instagram more than once, to the left was the very cool looking Blu Stage where you could get your electronic fix across the two days. To your right was the Noisey Presents stage where we watched Cypress Hill and a weekend highlight, Action Bronson.

Also in the first area was a dreadful looking ride (incase you hadn’t noticed, we’re not fans of rides), JunkYard golf were there testing your crazy golf skills, there were food options including a very nice looking Lebanese gaff, the Sweet Spot and the hidden gem of the weekend, The Carlsberg Export Bar. It didn’t look like a bar, but it was, beers were served ice cold from fridges, there was seating and because it didn’t look like a bar there was barely any queues. The only down side, it was pretty far from all the main action.. thinking about it probably a good thing!

Connecting the two main areas was a covered tree section surrounded by some pretty decent food and drink options; Aperol, pizza, pasta, all of that good stuff. Apart from being a bit dusty it was a good spot to shelter from the sun and munch.

Moving into the main area of the festival site you were first greeted by the swing ride and the big main stage in the distance. On your left hand side was a Blu activation which allowed festival-goers to charge their phones etc which was another hidden gem and the perfect way to engage festival-goers. Next to that was the Smirnoff Waterfall which acted as it’s only little dance refuge away from the masses. There was always a bit of queue to get in pretty much the whole time but that was because it was always vibing. It had it’s own bar so you essentially didn’t really need to leave. Opposite was the very sweaty Big Top which played host to heavy hitters like Solomun, Patrick Topping and Charlotte de Witte.

Before reaching the main stage, your way in and out of the VIP area was on your right, hosted by Highsnobiety the area had it’s own line-up, dedicated food options, Prosecco on tap, a Smirnoff bar and it’s own bar serving actual pints but at a premium. Apart from bumping into a lot of people we knew in VIP the main action across the weekend was in and around the I-D present Main Stage with our weekend highlights being Loyle Carner, J-Hus, Giggs and headliner who really brought it, Chance The Rapper.

Once again, Lovebox delivers two days of festival goodness in London. Saturday was MUCH busier than the Friday but both vibing in their own way. Thanks for the invite, thanks for the access, read on below for the full Lovebox 2019 review. 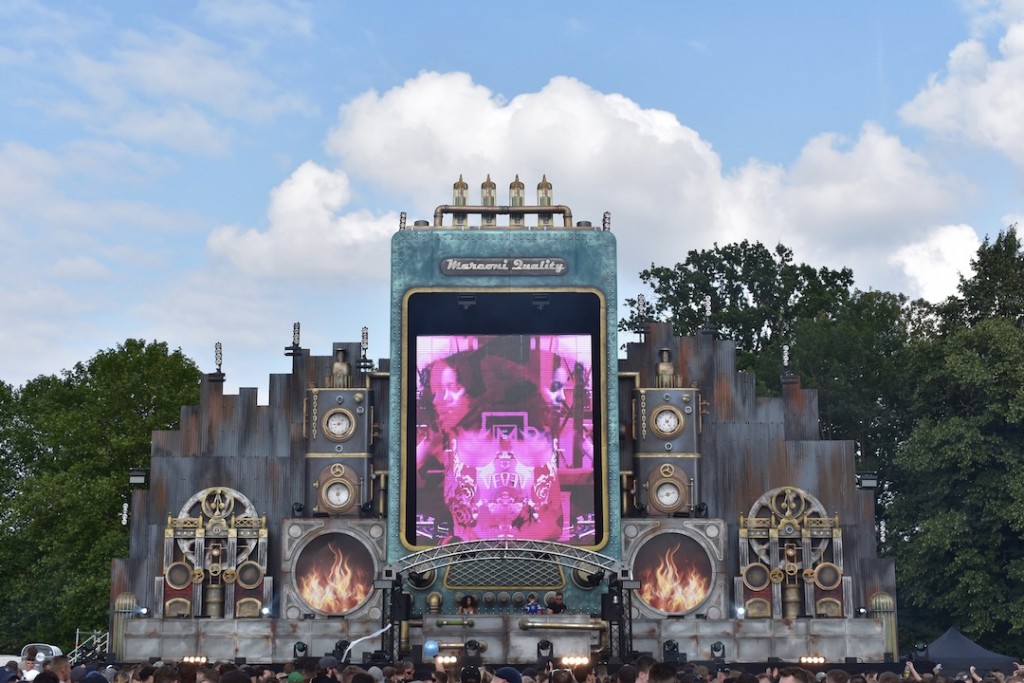 The Journey to Lovebox Festival

Travelling from East to West London may sound simple, and it does only require one change but it also means over an hour sat or stood, more than likely stood, on the underground. Going there, not much of a problem, coming back a bit of a different story. Gunnersbury Park isn’t the easiest place to get to unless you’re local and taxi drop off seemed to be a bit of a myth from the people we know who travelled from South, to be expected considering road closures etc. Your best option was getting the tube into Acton Town as Gunnersbury Park is only a short walk from there.

Getting In to Lovebox Festival

Getting in this year round was much easier, box offices were easy to locate and most festival-goers had the e-ticket on their phones ready to go which definitely sped up the process. Day 2 was busier in general but it wasn’t too much queuing to get into the festival site.

There were several check points on the way in, thinking about it, tickets were checked twice, there were random metal detector searches and security were pretty strict on the size of the bag festival-goers could take in, no bigger than A4 or it had to be stored in the cloakroom style tent by the entrance. A final ticket check, small bag search and a pat down before being allowed in, all very quick and thorough.

How Much Were The Drinks at Lovebox Festival

Lovebox is now pretty big time which means more commercial brands when it comes to beer and when we first saw it was Carlsberg we almost decided not to drink for the weekend.. jokes they actually came through in the end.

There was at least one bar next to every main stage, each with a queuing system in place which makes sense. Cans weren’t very cold most of the time but luckily we discovered the Carlsberg Export bar tucked away which had dedicated fridges, seating and basically no queues across the whole weekend.

Prices in the VIP area were slightly higher but you could actually get a pint which was pretty nice in the afternoon sun.

The Food Options at Lovebox Festival

We always look forward to the food options at Lovebox which we banged on about in our Lovebox 2019 Preview and this time round was absolutely no different. There was one issue though and this is from a purely selfish point of view, our favourite food spots are becoming far too popular which meant huuuuge queues; Anna Maes, Paellaria, Los Churros Amigos we see you shining! Expect to pay between £7 – £12 for some decent food, whatever your fancy. 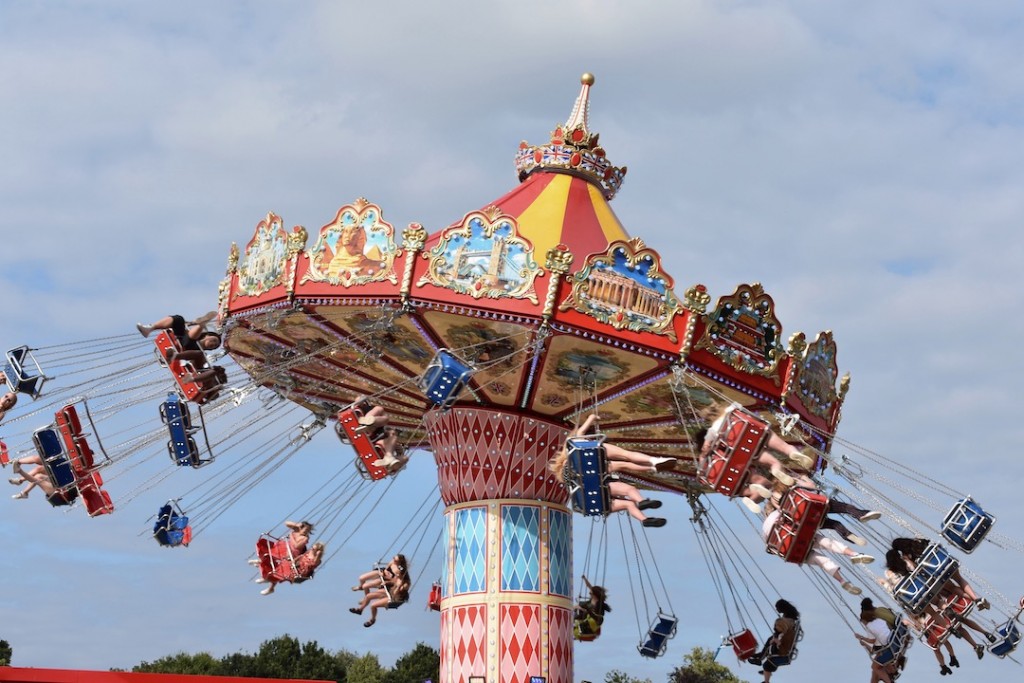 The Facilities at Lovebox Festival

Right by the entrance/exit was the health tent and next to that the HELP tent which dealt with things like lost property. Now, if you follow Charlie on Instagram you’ll realise he lost his set of keys on day 1, probably by the main stage as we think they fell out when he was taking his camera out of his bag and wait for it, everything is resolved! The keys were delivered through the post about a week after they were lost for the mere cost of postage. Charlie would like to say a HUGE thanks to whoever found them and handed them in, to lost property and the external company that has organised the safe return of his keys, he can now leave the flat and is going to celebrate by going to the pub.

As we mentioned earlier, Lovebox is pretty big time so they know to have plenty of toilets available in all the right places around the festival site. Not a huge amount of areas to sit and shelter from the sun but you are in a park so do have the option of just sitting down wherever you fancy.

Loads of security and police at Lovebox and not in a bad way. The police presence was notable as soon as you got off the tube and they seemed pretty on it with random stop and searches. It was the same getting into the site which acted as a deterrent only if you were doing something wrong. Once inside there was plenty of security around in all the right places, offering directions, handing out water for those in the front row.

The Stages and Music at Lovebox Festival

Gunnersbury Park seems to offer more space than Lovebox’s old home of Victoria Park, with loads going on to tick all of the boxes, the main stage areas to note were the Blu Stage, Noisey Presents, Big Top, Smirnoff Waterfall, VIP hosted by Highsnobiety and of course the Main Stage presented by I-D. A strong mix of genres across the two days, from championing new music to global superstars.

Noisey Presents was also popular, with Kaytranada and Action Bronson pulling the biggest crowds. The Big Top was sweaty, in a good way, playing host to heavy hitters like Solomun, Patrick Topping and Charlotte de Witte.

Gunnersbury Park is BIG, which means volumes were good. Strategic placement for busy performances was key though to ensure your set wasn’t ruined by people chewing each others ears off. 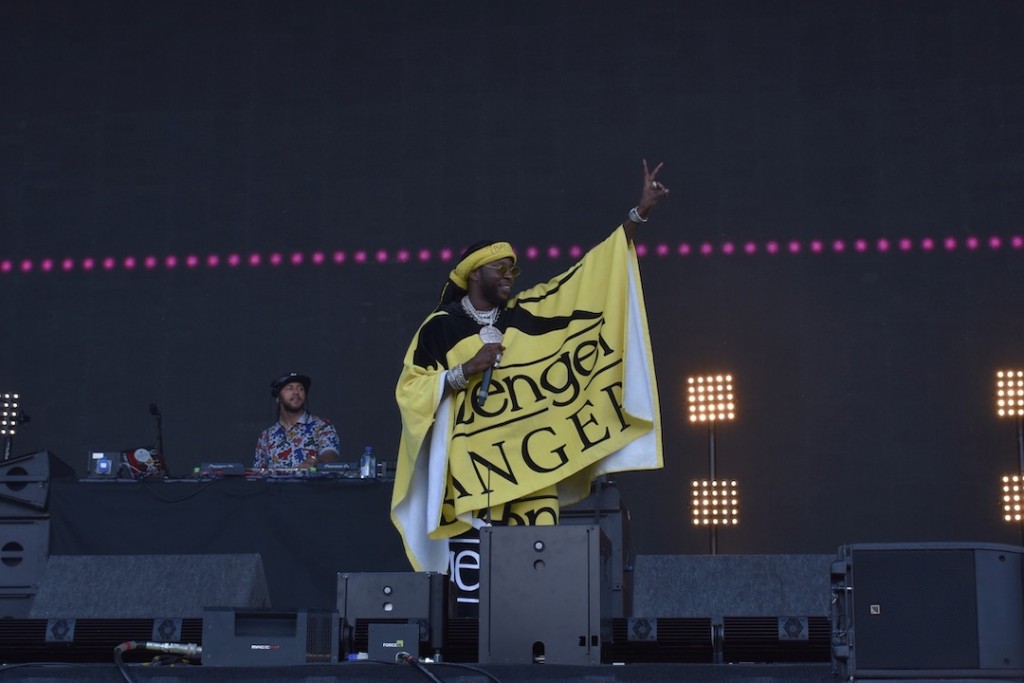 What Else Was At Lovebox Festival

Loads. You definitely needed 2 full days to enjoy everything. There were certain things we didn’t get to check out but we did check out the Pepsi Max viewing platform next to the fashion market by Garmhaus where you could pick up any last minute festival fashion bits. One of the stage sponsors, Blu also had an activation tent which had phone charging points in that you could use, only a few though available so you had to be in the know.

Only a couple of rides at Lovebox this year which we happily avoided. Junkyard Golf was there testing your crazy golf skills.

Lovebox really is becoming a well oiled machine, the organisers know how to put on a decent festival and we’re sure we can expect more of the same for the 2020 edition.