Last weekend we decided to discover something new and switch it up instead of heading to Wireless Festival, instead we were invited out into the depths of the Herts countryside to check out Back of Beyond, a dance music festival only in its second year.

The organisers decided to go big for 2019, expanding Back of Beyond into a 2-day event that would also allow festival-goers the option to camp – a bold move that looks to have paid off. Back of Beyond managed to host 8 stages covering a full spectrum of electronic and dance music, the majority of which kept the music pumping until 2am.

We headed out of the big smoke on the Saturday to check out what the fuss was about, it was a pretty easy journey from London and pretty cool to be driven, what seemed to be, deep into the countryside with the sound of bass getting louder and louder. When we arrived we were welcomed and escorted straight to the artist area backstage, the sort of hospitality we now expect at all future festivals!

Although there was quite a lot going on the festival site itself was pretty compact, it didn’t take long to have a walk around and get your bearings. Each of the stage areas offered something different but we’d say you needed the two-days to really take them in. We only really got to take in the main Beyond stage, a huge LED pyramid that played host Sam Divine, Goldie, Jacky and Danny Howard across the two-days and The Forest stage which offered festival-goers the chance to dance amongst the trees to Norman Jay MBE and Nightmares On Wax. The setting is sick, if you’re into your electronic music Back of Beyond is a festival you can go and lose yourself for a couple of days – we even met a unicorn in the food area.

Back of Beyond is nominated for ‘Festival of the Future 2019’ and we can definitely see this festival growing into an established date on the festival calendar. Let’s see who and what they bring to the Herts countryside in 2020. 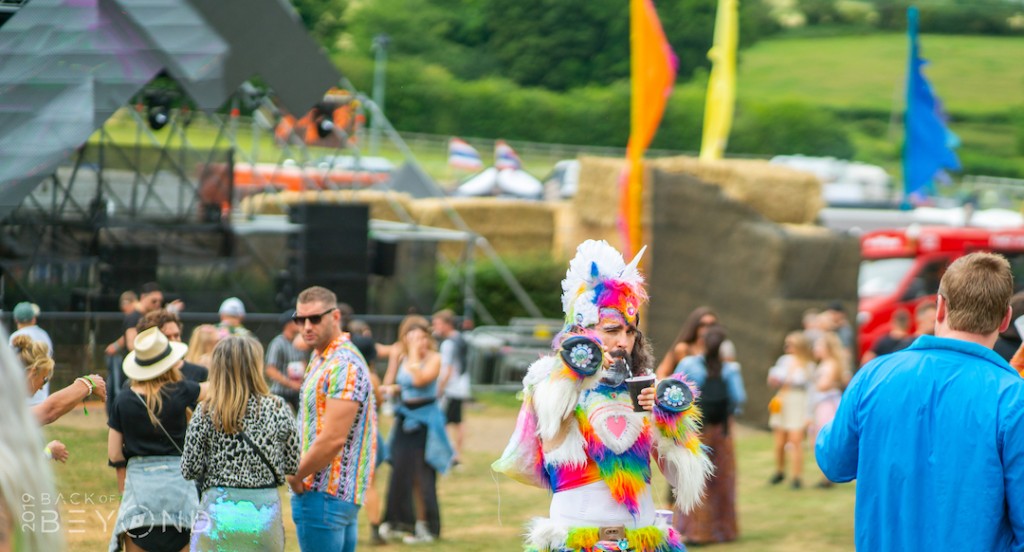 Unicorn Man at Back of Beyond Festival | LUKE

The Journey to Back of Beyond Festival

The thought of traveling to Stevenage from London first sounded a bit daunting but turns out it was really quite a simple journey, the train was literally 25 mins from London’s Kings Cross – who knew? Getting to the festival site itself was slightly more difficult and you needed to organise a taxi, the taxi’s outside the station wanted 20 quid cash upfront so we booked an Uber and it cost us 14 quid in total. It was also pretty straight forward for our Toyota Prius driver to follow the festival signs and drop us right by the entrance.

Getting In to Back of Beyond Festival

We arrived around 3pm and getting in as a punter meant queueing. It all seemed pretty civilised, there was a ticket check and then a bag check but security were happy and friendly throughout the process. Festival site opened at midday Friday so if you did want to skip the queue then you needed to get down there earlier.

How Much Were The Drinks at Back of Beyond Festival

Now we’ve already mentioned that the Back of Beyond Festival site was compact but there were still plenty of bars scattered around, every area had at least one bar which only seemed to get really busy towards later in the evening. There was no queuing system though which we’re used to which did mean a bit of a free for all.

The choice was paying by card or using tokens, again, we see why festivals do the token thing but in fairness to BoB, the tokens made sense although no refunds so you had to use them all:

0.5 token – for a single shot or 1 token if you wanted to treat yourself to a Jaeger Bomb

The Food Options at Back of Beyond Festival

Back of Beyond only had a few food options on site all of which were tucked nicely away from the stages which doubled up as a nice little refuge from the madness. Ever heard of the saying that sometimes less is more, well this certainly seemed to be the case at BoB with a good mix of food options you could get your lips around over the 2 days.

Burger Box burgers started at £7.50 and £2.50 for fries. Toastier and Baguette did an amazing looking Cheese and Ham toastie for £4.50 and they also offered an all singing all dancing Breakfast Baguette for those camping and/or all-day breakfast lovers. Plenty Of Dough were making fresh pizzas between £7-9 or Sukyana Thai Food had a meal deal for £10. Perky Blenders – great name, can you guess what they were serving? Yes, coffee and also a very nice and refreshing Espresso Martini which we had to try!

The Facilities at Back of Beyond Festival

Plenty of toilets around the festival site in each of the different areas which again only seemed to get a little busy later into the evening. The fact the music was back to back meant a constant flow and no mad rush to the toilets when an act finished.

There was a health tent by the festival site entrance.

Several camping options were on offer but if you wanted to VIP experience then you had to get in a book early as these sold out well in advance of the festival.

Back of Beyond Festival Security

Plenty of security around. As we mentioned previously everyone working the festival that we came across had a smile on their face and were happy to be there which was certainly infectious – in a good way! 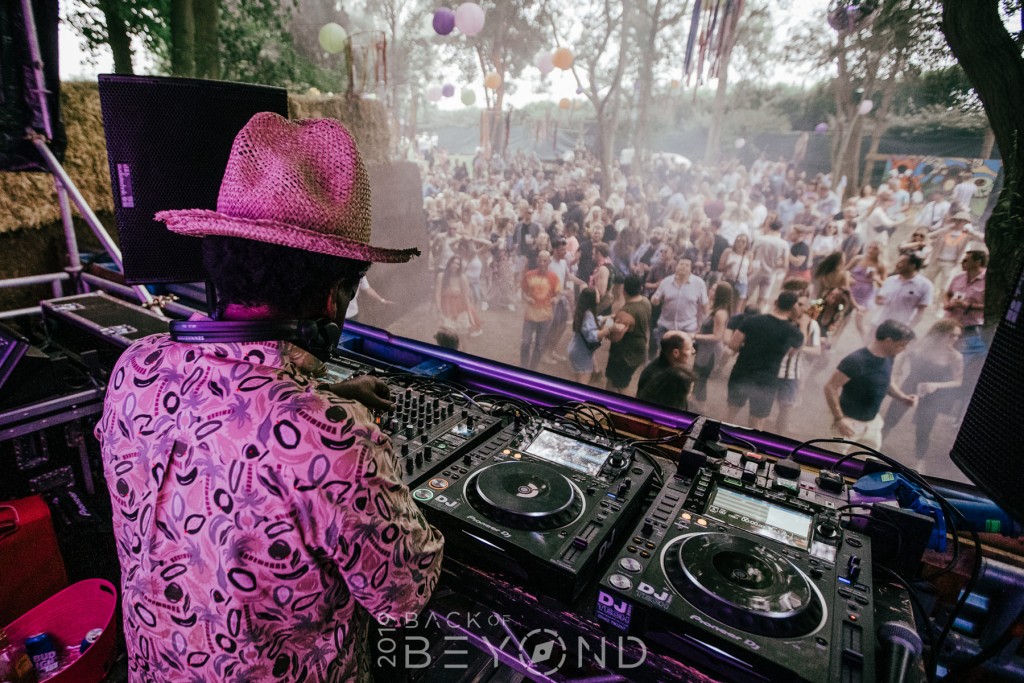 The Stages and Music at Back of Beyond Festival

As you entered the site and just past the food hideaway you were straight into the main Beyond stage area, a massive LED screen that sat at the bottom of a slope and really came to life when the sun started to set. Shout out to Jacky for inviting us behind the decks for part of his set so we could get that all important content for the gram, both him and Radio 1 Dance Anthems King, Danny Howard definitely pulled the biggest crowd whilst we were there.

Our other favourite area was The Forest which played host to the likes of Norman Jay MBE, Nightmares of Wax and stayed open until 2am.

The VIP area had it’s own, slightly more chilled out line-up keeping everyone moving until the early hours of the morning. Other stage setups worth mentioning and checking out because they offered a more immersive experience was the UV area, the Outer Limits area and the Hay Days area – slightly more niche line-ups but cool concepts!

The music was all things electronic and dance which had pretty much everyone two-stepping and throwing shapes by the time we called it a night. Big names in the game such as Sam Divine and Goldie graced the decks on the Friday night which we were told went orrfff. On Saturday we managed to catch a whole host of artists including Artikal, G W Harrison, Nightmares on Wax and headliner, Danny Howard.

Dance and electronic festivals are usually different from your indie and rock festivals in the sense there isn’t usually a gap between artists so unless you’ve got a really keen eye then you probably won’t spot if an artist is late or not, that said everything ran smoothly and on time. When we weren’t watching artists perform we were lucky enough to be hanging out with them in the artist bar backstage, we won’t tell you who drunk the most but we will say a big thanks for the hospitality. 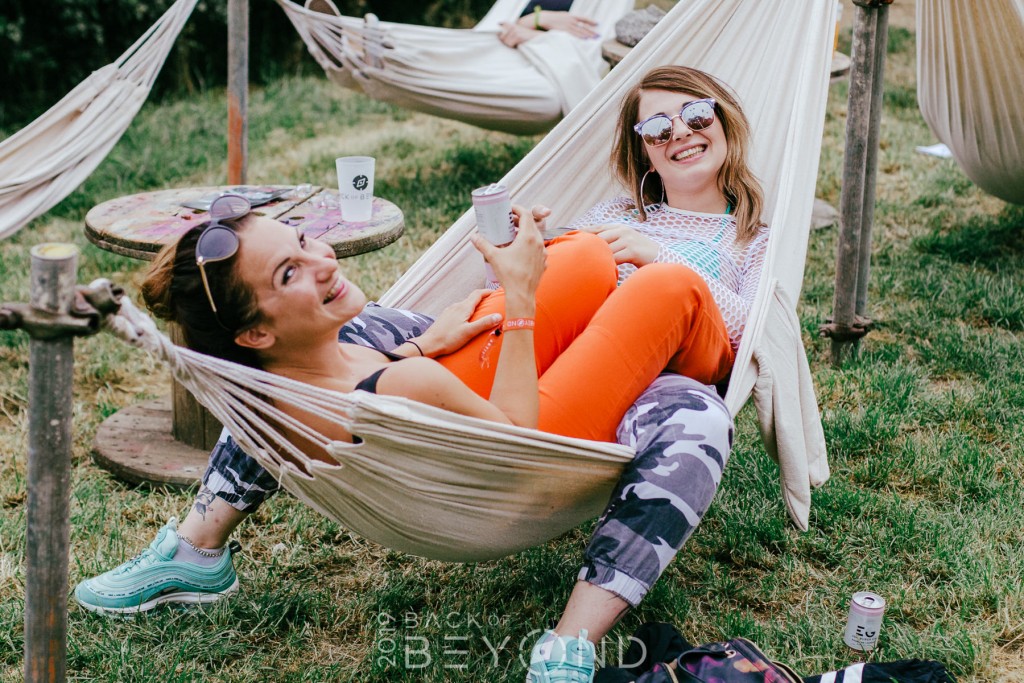 The VIP Area at Back of Beyond Festival | VISION SEVEN

What Else Was At Back of Beyond Festival

We mentioned the VIP area which had it’s own line-up throughout each day but we didn’t mention the two dedicated bars, one of which offered table service, the prices weren’t terrible but they weren’t as good as the prices at the artist bar. There was loads of seating in the VIP area, including a bunch of hammocks for that all important disco nap.

The only real other place to chill out for a minute was the food area, the only real danger with heading here is that you’d probably end up buying food as everything smelt so good.

There were loads of cool art installations and graffiti around the whole site which made for even more content opportunities, something most festivals are considering even more so now.

The camp site was separate from the main festival site and we didn’t stay, we decide to make the commute back to London which was certainly doable but not recommended if you really wanted to immerse yourself into the Back of Beyond experience. Also, there are no trains at 3am so make sure you plan ahead for the third edition.